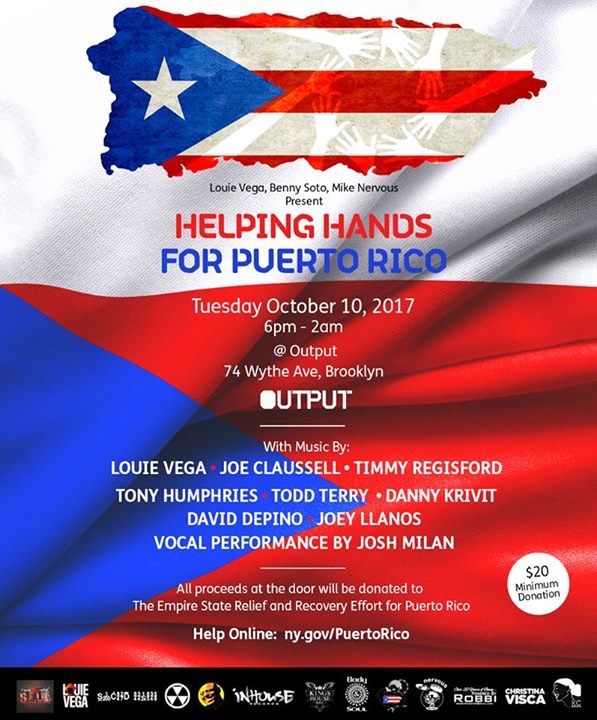 Tuesday October 10th, eight of the world’s most celebrated house music DJs will perform at Output Club for the Helping Hands to raise funds for Puerto Rico. This event is curated by Grammy award-winning DJ and producer Louie Vega. Louie is one of a select group of talented artists of Puerto Rican heritage who have made vital contributions to New York City’s nightlife, music and culture. He felt it was crucial that he do something to help his friends and family in Puerto Rico in the wake of the tragedy following Hurricane Maria. 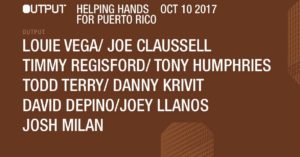 Each DJ will play for an hour in this 8-hour show with a vocal performance by Josh Milan. The lineup consists of artists who are either of Puerto Rican heritage themselves, or who also share a deep appreciation of the contributions that the Puerto Rican community with its deep ties to New York City have made over the years as producers, dancers and clubgoers.

This event is being hosted at Output Club in Brooklyn. Output was recently voted Club of the Year at the Electronic Music Awards, and was named Best Club in Northeast America by DJ Mag. Nightlife veterans Benny Soto (also of Puerto Rican descent) and Mike Weiss (founder of Nervous Records) will be overseeing promotion.

There is a $20 minimum contribution. 100% of door proceeds will go to The Empire State Relief and Recovery Effort for Puerto Rico.